[intro]Celebrating their third annual event, Dubs For A Cause is focused this year on helping spread awareness for Multiple Sclerosis[/intro] [hr type=”single” margin_top=”30″ margin_bottom=”30″]

Mike Brazil and I have known each other for three or four years now and we’ve grown a mutual respect for both one another as individuals, and for the goals that we have with our respective organizations – Dubs For A Cause and Fresh From Birth respectively.

The Dubs For A Cause 3 Flyer 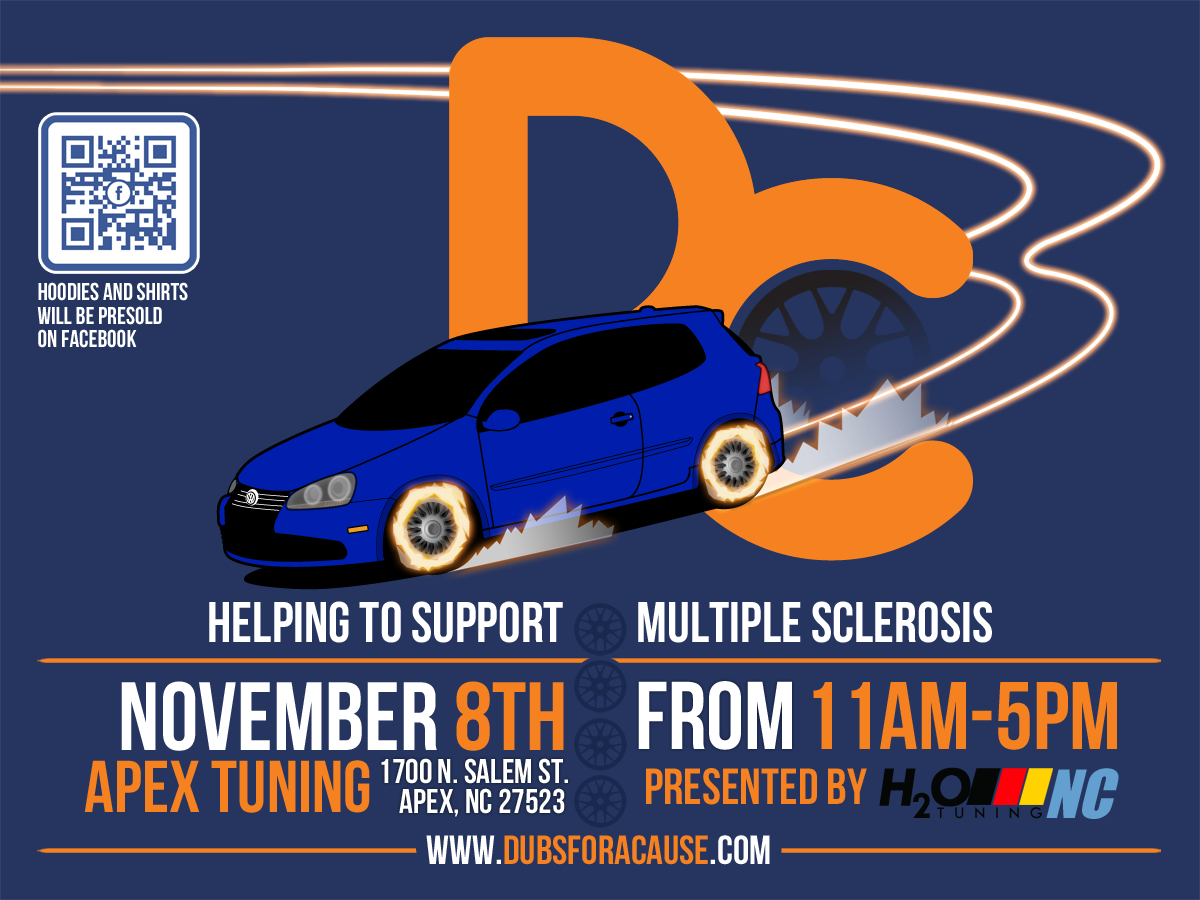 During an event that I co-organized with various local car enthusiasts called Freshwise III in Charlotte, Mike and I had a chance to catch up in person and discuss his plans to push the marketing effort of Dubs For A Cause, slated for November, up to May in order to get the word out sooner and grow the event. The purpose for getting the word our in May specifically is that an event called SOWO, one of the largest VAG (Volkswagen Audi Group) events is held on May 16-18th. Dubs For A Cause focuses on the VAG scene, although they love for all car enthusiasts to join-in on both the fun, and charity component of their event. With that in mind, pushing Dubs For A Cause during SOWO, the same target audience, would certainly help push the awareness of the event, and hopefully bring even more enthusiasts to this year’s event in November.

Mike wanted a flyer by SOWO‘s event date (May 16th), so the challenge was to get all the event info on the flyer and make sure it was visually appealing by that deadline. Well, I needed to get it to him by May 10/11th in order to give him time to print to handout at SOWO, and also push digitally across his social media channels. The hard part was that I didn’t receive the info until a week before the deadline, but with the help of Justracy, we got it done!!

Omg you rock! Ty so much these will be printed tmw and taken with us to sowo!
Mike Brazil

Mike sent me a link to Luis’, his friend, photography portfolio that allowed me to choose a couple profile shots of his blue VW MK5 R. I saved a couple and started playing in my mind with a concept that I thought might work, but wasn’t sure if I had the time to pull it off. I realized that I didn’t have time to waiver, so I went for it! I sketched out my concept, and got to work.

Various photos of Luis’ car were shots of him taking corners around a few mountain passes. I drew out an elongated number three and thought, “maybe I can make Luis’ car drive around the Dubs For A Cause logo and form a three with an afterimage of sorts…”. I drew out a sketch of the logo, and then a three and thought, this just might work. I photocopied the image with the car shot I wanted to use and was excited, this just might work!

I got to work, and began by vectorizing Luis’ car. It took time. I wanted it to be realistic, and was adding realistic shading, but then I realized that all the graphics that I’d seen Mike like in the past seemed flat. Those cars had detail, but in a 2D format that worked well with their audience. So I took the same vectored car and then began flattening the image so that it was more of a car..tune, get it!? (looks down) sorry – I’m not sorry 😛

I’d given Justracy heads-up that I would need her help and a quick overview of the concept. She was down to help – that was HUGE! I gave her the copy, the fonts I wanted to the flyer to feature, and the general spacing. She got it all figured out, and we quickly figured out the color scheme that worked well. It was easy since Mike had requested Orange and Navy Blue (colors representing Multiple Sclerosis), but we still needed to find a good orange and blue to work with. Her biggest task was creating, “the three”. I wanted the three to be shaped by two separate lines (photoshop curves) that represented the car’s tires as it hauled a$$ down the mountain pass.

As Justracy finished her work on the text and, “the three”, I was also finishing work on the 2D MK5. Justracy and I were ready to combine our efforts. We were using Google Drive to easily collaborate, so with her file shared, I dragged the car into the flyer and she and I began working on placement of the car onto the tire paths that formed, “the three”. We realized that we needed some more detail to make the flyer really come together. Justracy worked on the headlights to make them glow in the dusk-ridden flyer’s navy blue background. As she worked on that, I focused on creating a 2D smoke to come off of the tire. I’d played various Japan-only releases of car racing games that used cell-shading as their visual effect for the game. For that reason, those kinds of racing games used 2D smoke, simple white and semi-transparent smoke effects to model the burn of tires around corners and straight-aways, all the while keeping that arcade feel. This effect was exactly what I wanted to do, and I made a simple vector object in the shop I wanted for all the tires, added into the photoshop file, and then added the appropriate layer styles to match the rest of the flyer.

With a little more tweaking here and there, we finished the flyer, and sent it off to Mike. HE LOVED IT! Not only did we meet his deadline, but it was a pretty cool looking flyer that featured one of his teammates’ cars. I’m glad we could deliver. Justracy helped me a bunch, and it was great to work alongside another graphic designer. We had plenty of ideas and kept each other in-check. Divvying up responsibilities was easy since we already knew each other’s strengths and how we could use that to gain efficiencies in finishing the project fast.

I can make a flyer about any kind of event. It always helps me to understand the event though – that way I can best fit a design to the event’s message. In this way, I create brand aligned content that goes along with all the other efforts of a client.