Just before any trip to a new place, I get the jitters of excitement and nervousness. Going somewhere new can be thrilling, all the new sites, sounds, and food – seeing how people in another part of the world lives is such an exhilarating learning experience. But…sometimes being lost and being unaccustomed to the aforementioned exciting things can be a bit nerve racking too!

To begin with, my father and I started our trip with a two hour wait at Charlotte Douglas International Airport. It had been a while since my last time at the airport. I suppose I’ve been picking locations for vacations that are closer to either Charlotte or Chapel Hill in which driving has been the only reasonable option.

Two hours isn’t terrible, but the time on the tarmac was way worse. 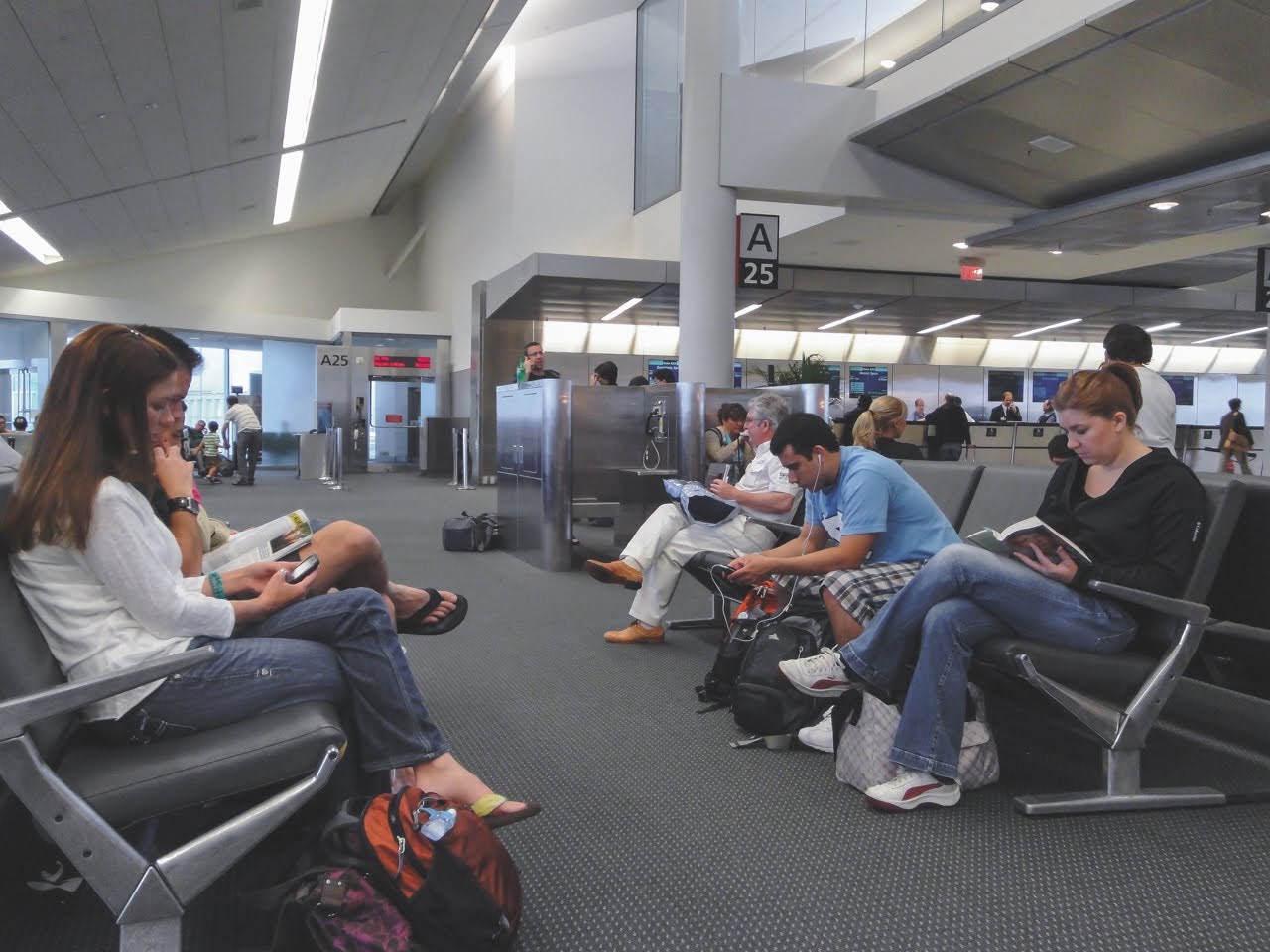 Two hours isn’t terrible, but the time on the tarmac was way worse.

Conga on the tarmac

Oh, and to the fault of the Philadelphia Airport, for closing one of the runways, we had a four and a half hour delay. This is how we knew we’d be in for a long wait:

Captian: “Hello Ladies and Gentlemen. I’m being told that one of the runways is closed and that all traffic will be re-routed to the available runways. There are multiple entry points to the remaining runways. We have to wait for our turn on the runway, but it will be hard to predict an exact departure time…”

Here is when everyone onboard voiced their dismay.

Captain: “We have roughly 36 airplanes in front of us and there is no exact order to when planes from the different terminals will be told to go.”

Wow! That was not cool. Worst part was, for the entirety of the four and a half hour wait, we were continuously told, “we should be departing here shortly…in about thirty minutes” Instead of telling us an expected time for departure (say 4 hours or so), we were told that we would depart in thirty minute, about eight or nine times – serving pretzels and water was an immense help! (Yeah right). Apparently, the Spanish people wanted to start a massive Conga Line on board:

Yeah well, the flight crew wasn’t having it, “Please do not gather in the walkways, the galleys, or the lavatories please, thank you.”

So after our immensely long wait, we finally took off. The flight itself was great…”itself.” We sat in the middle of the plane, alongside the wing. I suppose the initial vibration and sound of the turbine engines may have disrupted the sleep of a baby, because he didn’t stop crying (and I mean CRYING), for at least thirty minutes. Then once he stopped and cabin life went back to normal. The optional entertainment system was then turned on. This system uses a remote control that is positioned in the armrest of the seat to control a few options in order to pick your movie/television show to watch. Well, mine worked, but my father’s system didn’t. The screen flashed “click any button to begin” and yet pushing “any” button and every conceivable button combination didn’t work either. We spoke to one of the attendants who said that he would re-start the system. It didn’t work, we told him again, and it still didn’t work. We eventually gave up. I was less interested in watching a movie, so I traded seats with my father. He began watching Gran Torino, but ten minutes into the movie, I looked over to see him passed out. So after all that…

The in-flight dinner was pretty good.We had the choice of chicken or pasta, which I think has been the only options provided by American Airlines since the inception of the service.Either way, you get your little tray with: Chicken, baked potato pieces, green beans, salad (like three pieces of lettuce with about two cups of shredded carrots on top), a bread roll, a piece of cake, and the necessary condiments and plastic cutlery.

Dinner finished, and many people began falling asleep. We finally got to the airport in Madrid and headed to the baggage claim and bought tickets for the Metro to head towards our hotel located on the Gran Via.

That moment that we got out of the metro station was so exciting. A new place with unfamiliar sights and sounds. 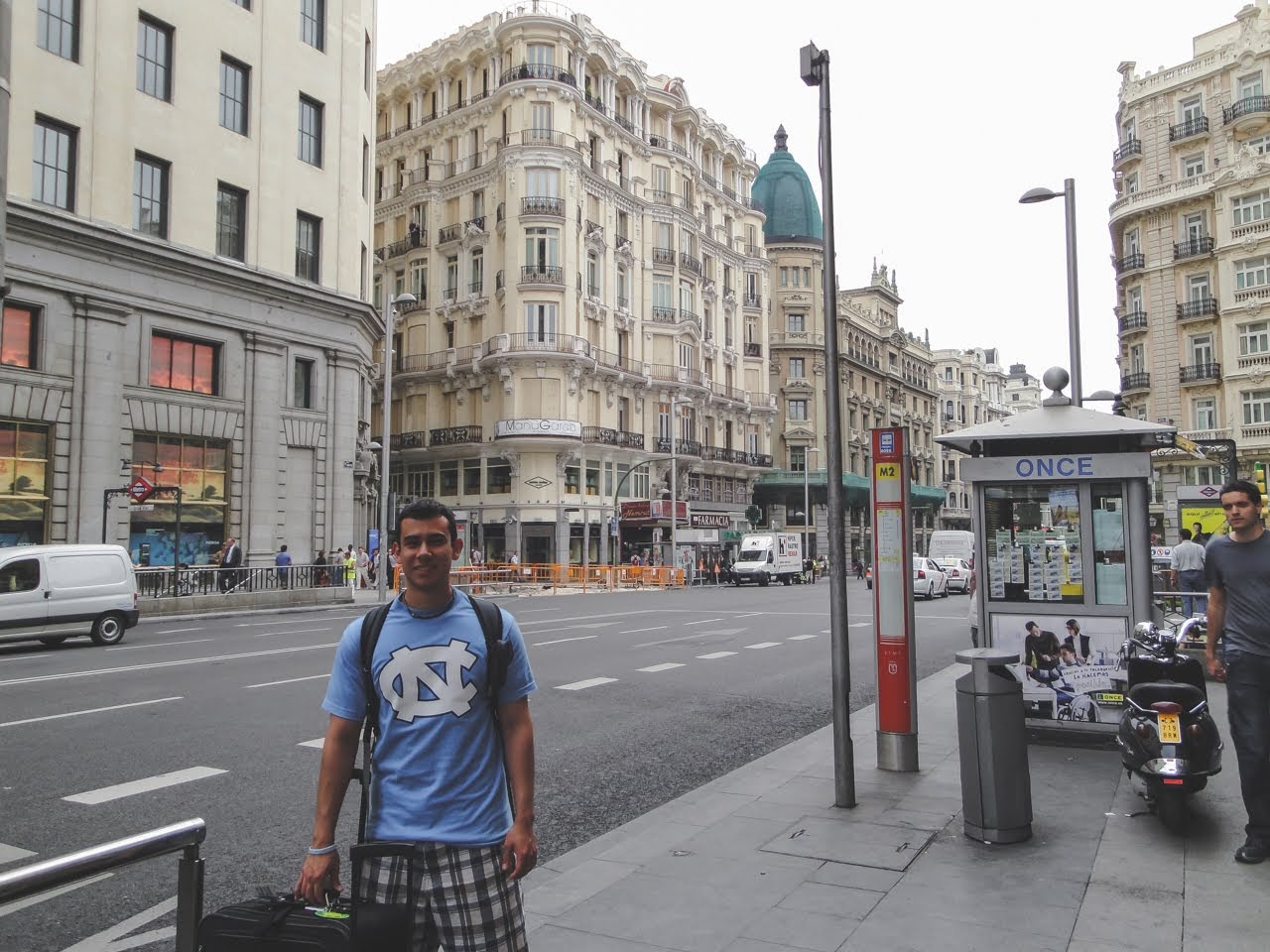 That moment that we got out of the metro station was so exciting. A new place with unfamiliar sights and sounds.

Getting off the subway, took a few quick photos of what we saw, and then walked approximately four or five blocks to our hotel. The hotel is nice. It is what you would expect of a hotel in Europe; the rooms being small (in comparison to what you find in the U.S.) and the television being VERY old and VERY small.

Our hotel room in Madrid Spain was at the Hotel Tryp Rex and featured two beds pushed up against each other. They didn’t have much padding, but I’d say we walked enough during the day, that we feel asleep quickly anyways. 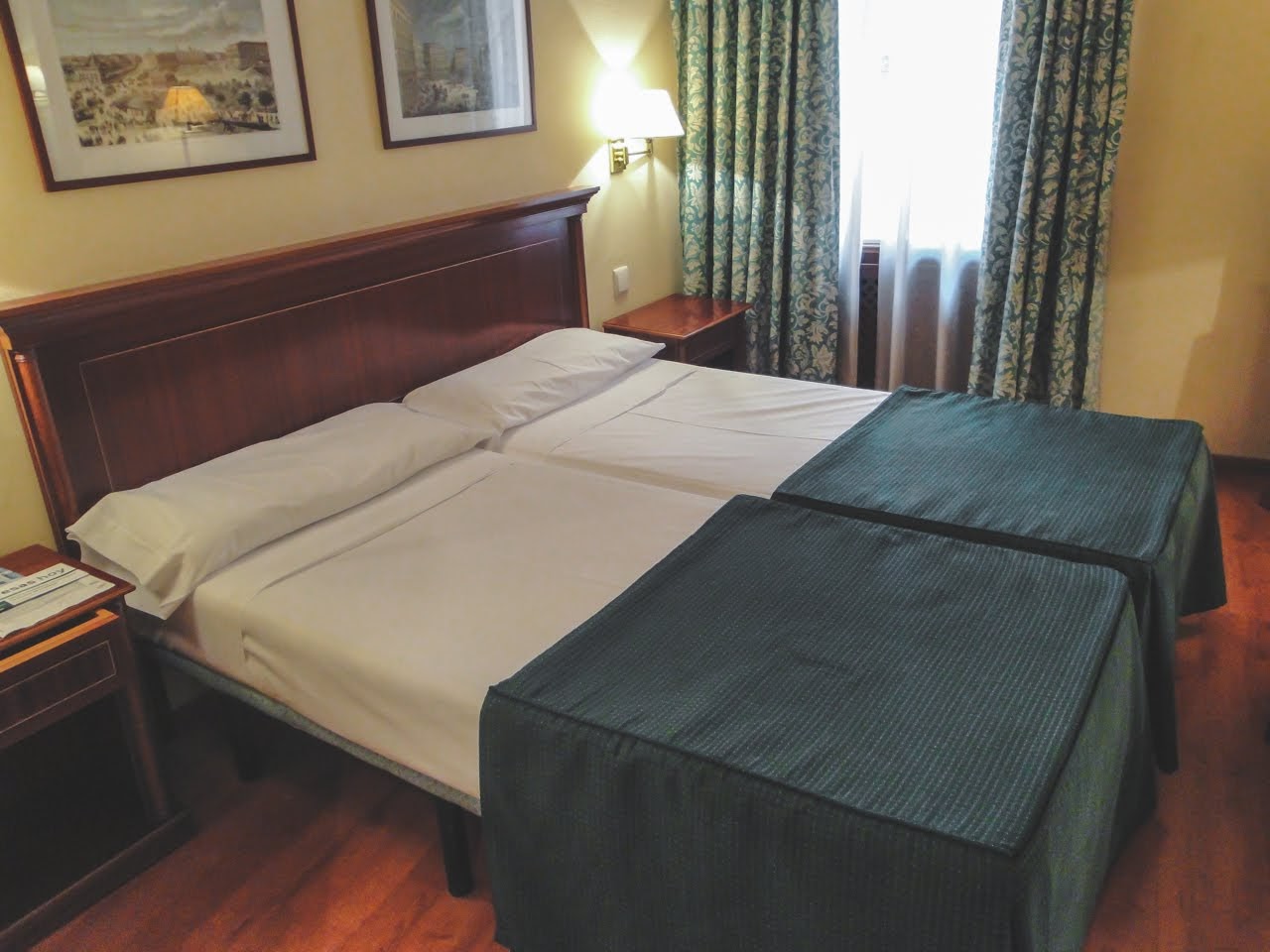 Our hotel room in Madrid Spain was at the Hotel Tryp Rex and featured two beds pushed up against each other. They didn’t have much padding, but I’d say we walked enough during the day, that we feel asleep quickly anyways.

The television isn’t a big deal, but it is kind of cool to view programs in Spanish, English, French, and German.

Oh, and one last thing in a hotel that tells you that you are in Europe is…a bidet. And no, that isn’t a sink for children…in case you haven’t seen one of these things before 🙂

The bathroom featured a bidet while the shower was only partially covered and therefore a good bit of water ended up on the floor. 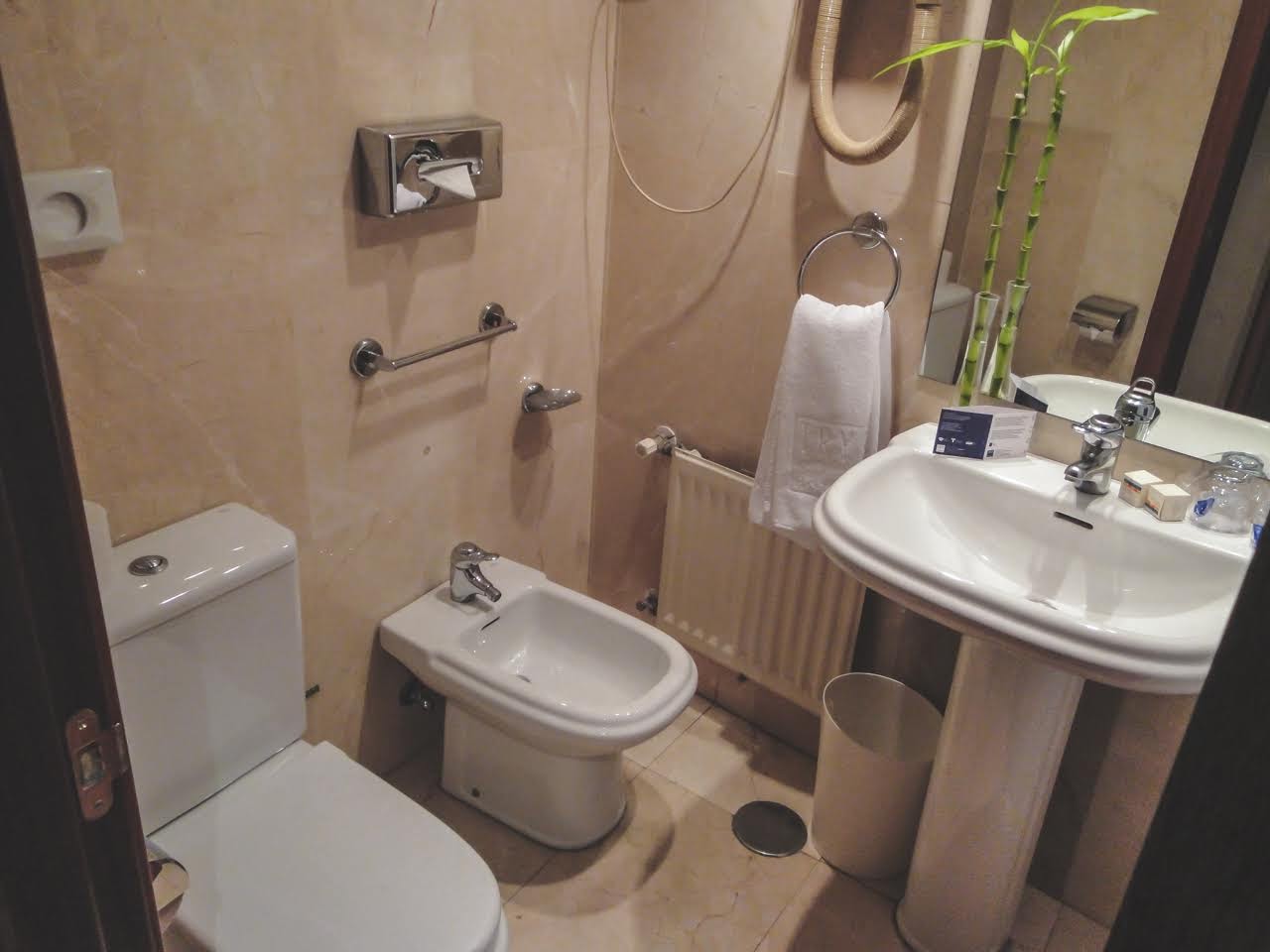 The bathroom featured a bidet while the shower was only partially covered and therefore a good bit of water ended up on the floor.